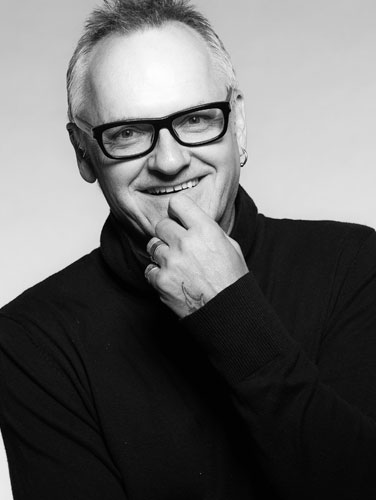 Growing up the son of troubadour acrobats in the colorful world of the European circus, Michael was always surrounded by color and shape. His flair for creative artistry led to a passion for hair at an early age. At the apex of Vidal Sassoon popularity, the company hired Michael upon graduating beauty school. In a whirlwind, he became the youngest artist to join the team and shared his creativity with some of the most prestigious audiences in the world. Educating himself with the help of the leading colorists in the fashion playgrounds of both london and paris, Michael soon worked with color powerhouses Redken, Wella, Schwarzkopf, Framesi and lLoreal. He is known by many in his field as a master colorist.

The house of Christian Dior for the study of make-up and design was his last European stop before returning to Beverly Hills. Leaving Sassoon to follow his dreams of cut, color and make-up, he soon began working with Alexander of Paris, Trevor Sorbe and Gene Shacove where he advanced his skills in hair design by style. His art of finishing a shape has appeared on many of the most famous heads in Hollywood. With editorial credits ranging from music videos and production work for the MTV music awards, Versace, Yves Saint Laurent and Oscar de la Renta, Michael has contributed his creativity for the Academy Awards, Golden Globes, “Extra”, Emmy Award shows, and many others.